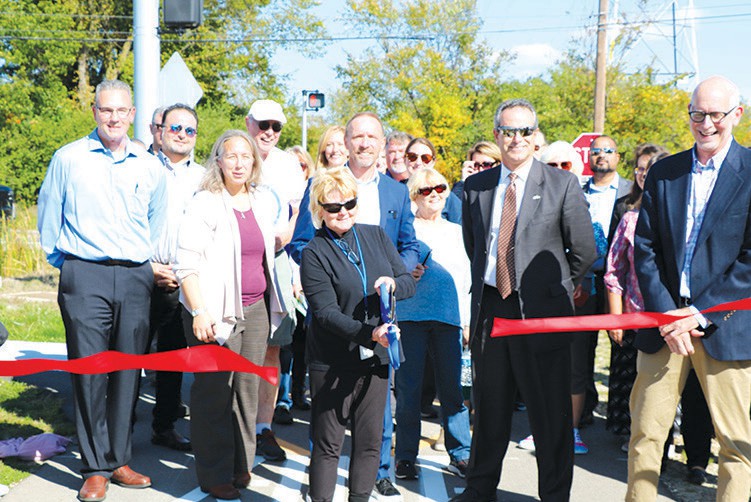 Community leaders and trail advocates from the Lakes Area came together to celebrate a new trailhead for the Michigan Air Line Trail, as well as the trail itself, in Commerce Township last month.

Leaders from Commerce Township and the City of Wixom were in attendance, as well as representatives from Oakland County, Michigan Trails and Greenway Alliance,

The dedication ceremony had been delayed nearly two years. It had been intended to take place in November 2019 but was delayed by an early season snowstorm. Postponed until spring 2020, it was delayed again by the pandemic.

The second phase of construction will have trail users taking a path through downtown Wixom. Currently, there is street parking in front of downtown businesses on Pontiac Trail, but it will be eliminated to create a bike and pedestrian path. To eliminate congestion and allow access to businesses, there will be a 10-foot path for bikes and a five-foot path for pedestrians. The split path is proposed only for the downtown area.

“As much as the bridge over M-5 is a focal point of the trail, the pathway that’s going to go through downtown Wixom is going to be maybe even more so,” John Hensler, trailway manager said. “When we brag about our trail in years to come, I think we’re going to be bragging about that block where Country Corners is right now in downtown Wixom. We’re thrilled to be helping enhance the downtown a little bit with the trail going through there.”

With the extension of the trail, organizers are seeking to designate Wixom as a Pure Michigan Trail Town. The designation is given to public routes of at least one mile in length that provide access to national, state or regional scenic resources and that “capture the natural essence of Michigan.” They may be single trails or a combination of trails, must be open to the public and substantially complete. Communities given the Pure Michigan Trail Town name are identified as vibrant places where trail-based tourism meets the needs of both trail users and town residents. If approved, Wixom will become the first official Trail Town along the Michigan Air Line Trail.

Once complete, the Michigan Air Line Trail joins route one of the Great Lake-to-Lake Trails, a 275-mile trail that connects one Great Lake to another, from South Haven to Port Huron.

“At MTGA (Michigan Trails and Greenway Alliance) we are always excited to celebrate the progress of trail networks, especially along the Great Lake-to-Lake Trails,” Andrea LaFontaine, MTGA executive director said. “We’ve seen ridership grow in popularity over the last year, so it’s pretty to cool to know that they’re coming through this community right here. When you get a community who embraces a trail, and businesses who embrace a trail, it truly makes that community’s quality of life increases for all of its residents and all of its trail users.”

According to Hensler, design for phase II of the trail is complete. He expects bids to go out in January, with construction beginning in April or May. The project is expected to take four to six months to complete.

As part of construction, a HAWK crossing (High-Intensity Activated Crosswalk) will be installed in front of Wixom Elementary on Wixom Road. Plans also call for Mack Park, a 0.2-acre park at the corner of Wixom Road and Pontiac Trail, to have a new or enhanced gazebo installed, as well as additional benches, a bike rack and water bottle refill station. Once downtown, informational kiosks will be placed with a trail map and facts, as well as trail rules and etiquette and a listing of local businesses and restaurants.

“I couldn’t be happier,” Hensler said. “I’m thrilled with how everything is finally coming together. With our friends group, we’re trying to develop some programs and events; they have tons of ideas. I think as the trail gets completed in phase II, we’re going to see even more events and stuff like that all tie into being a Trail Town.”

Michigan has more rail-trail than any other state in the country, and Oakland County alone currently has 138 miles of trail. Oakland County Executive Director Dave Coulter says it’s a goal to increase that number to over 400.

“We are happy to be adding a couple more miles to that 400-mile goal next year when we complete phase II,” Hensler said.