he future is looking bright for the Michigan Air Line Trail. The trail’s first segment is officially open and the council that oversees it is looking forward to developing another 2.4-mile stretch soon.

Stretching from from Wixom Road in Wixom to Haggerty Road in West Bloomfield, 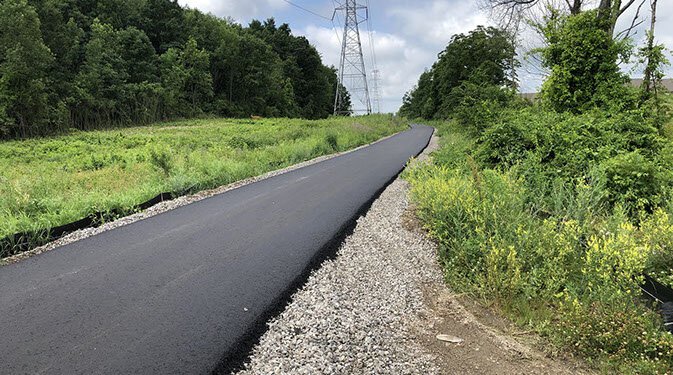 Michigan Air Line Trail the non-motorized asphalt pathway is currently 5.5 miles long and features warning beacons at most road crossings to alert motorists when the trail is in use. The greenway gets its unusual moniker from a railroad line built in the 1880s that once ran along its route, which is thought to be named itself after the path a bird makes in the air.

Linking up with the Huron Valley Trail to the west and the West Bloomfield Trail to the east, the Michigan Air Line Trail is also part of a larger greenway system: the Great Lake to Lake Trail’s Route #1, a statewide non-motorized route that stretches from South Haven to Port Huron. Its  construction is governed by a council that includes representatives from Wixom, Walled Lake, and Commerce Township, the three communities it runs through.

Over the next few months, wayfinding signage and informational kiosks will be placed on the finished part of the pathway, completing phase one of the trail. For phase two, the council will be developing an 2.4-mile area between Old Plank Road and Wixom Road that will cross right through downtown Wixom. A portion of street parking will be removed downtown to make room for a sidewalk pathway. The downtown section of trail will pass by a number of local businesses including the Drafting Table Brewery and the appropriately named Trail’s Edge Cafe. 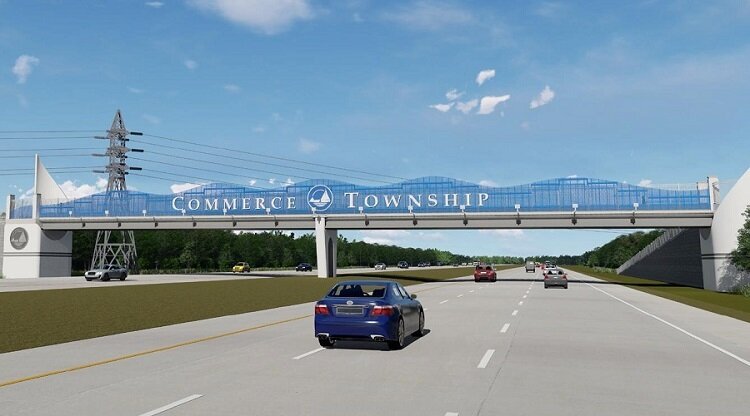 M-5 pedestrian bridge Michigan Department of Transportation (MDOT). We’ll find out sometime this summer if we have gotten the grant to go ahead, and if that’s the case then we’ll do construction on phase two next summer.”

Right now, those wishing to cross that area along the Great Lake to Lake Trail must use an alternative route. Travelers heading west at downtown Wixom now have to take a temporary route across Pontiac Trail to Old Plank Road to reach the Huron Valley Trail.

Wixom, Walled Lake, and Commerce Township formed the CW2 Trailway Management Council in 2009 to look into the possibility of purchasing the former rail line. The council finally acquired land for the greenway in 2017 for $2.6 million.

Not long after that, philanthropist Mike Levine, a strong advocate for Michigan trails, agreed to pay the $220,000 needed for phase one design engineering to help jumpstart the greenway. The council ran into a temporary setback after applying for a TAP grant through MDOT, which requested a higher level of matching local matching funds before it would fully approve the project. Fortunately, the Ralph C. Wilson, Jr. Foundation eventually stepped in as a partner to move the project forward.

The construction of 5.5 miles of trail between Wixom and Haggerty roads for the first phase of the project was finished last year. A pedestrian bridge over M-5 that connects with the greenway was completed as part of a separate roads project in 2018.