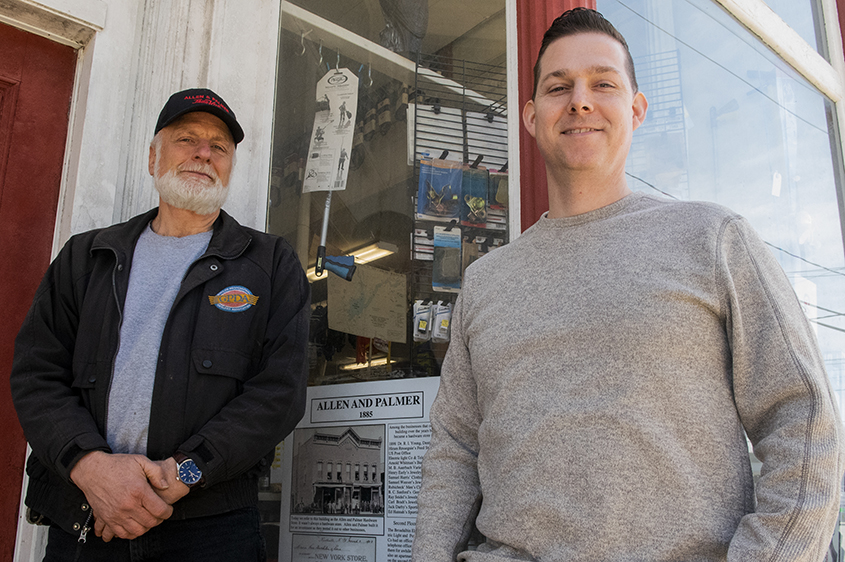 NORTHVILLE – The smell inside the store is what Brant Robinson remembers from his first visits to Allen & Palmer as a high schooler.

He’s too familiar with it after 20 years to notice as much anymore but he said, “it’s got a unique smell, like [an] old feeling.”

Allen & Palmer, the business, and its current home at 112 North Main St. in Northville bring an Americana essence to the village’s downtown. Civil War veterans Edwin Allen of Vermont and Andrew Palmer of Northville started a hardware business on North Main Street in 1870. And 112 North Main was built in 1885, first to rent out as an investment opportunity alongside their first store – built in 1882.

On April 1 of this year, one of the village’s core businesses was transferred to its fifth set of owners as Dominick Cox and Christian Klueg took the reins from Lee Robinson, Robinson’s uncle, and Shawn Darling.

A True Value since the late 1960s, according to Lee Robinson, Allen & Palmer is a hardware store in the model of the originals, offering many services to the community in addition to the products they sell on their shelves. The store offers plumbing, heating, window and window screen repair services and helps people opening and closing summer camps. The inventory has grown and now includes sections for paint, automotive and fishing needs to match any sporting goods store – valuable items located down the street from the Great Sacandaga Lake. Customers can find humane animal traps and the store even serves as a UPS shipping location.

Robinson, 65, said both he and Darling, 60, were planning to retire and sell the store after nearly 25 years at the helm, the anniversary would have been Saturday.

Robinson approached Klueg around Thanksgiving because of his experience in real estate sales and appraisal to discuss ideas for valuing the business. Over time, Robinson and Klueg worked out the numbers. Then, one Sunday morning at church, Klueg and Cox, both volunteers with youth ministry at Baptist Church of Northville, who had spoken previously, had a conversation that led to a deal. A process Robinson thought might take two years was completed in months.

Klueg, a Northville resident driven to see his hometown succeed, is doing a lot of back end work in marketing and strategic planning, whereas Cox is operating the store on a day-to-day basis.

Cox, 43, enjoys that his commute to work is just minutes through the village where he lives with his wife and their three children.

“I’ve always wanted to work right from home. I mean, I can walk to work if I really wanted to,” Cox said. “I always liked the idea of being able to have a shop right here in Northville. So, when the conversation started to happen, it was like, ‘Okay, this might be a good fit.’”

Beyond the continuation of the store’s historic legacy, Cox is already in the process of learning from the Allen & Palmer staff including, Darling, Lee Robinson, Brant Robinson and Brant’s wife Amy. The new store leader took each store employee to The Farm Store – the hardware store’s location from 1875 to 1969 – for one-on-one conversations to get to know them, and to reassure them there would be no cuts in jobs or pay. Amy Robinson said they also asked the employees to shared suggestions when they have them.

Coworkers and longtime customers are kind while she conducts inventory and stocking, and runs the cash register. She started working at the store a year ago, after a career as a phlebotomist at Saratoga Hospital.

“They’re willing to help me learn a lot,” she said. “I am just completely candid with the customers. And it’s like, ‘You know, I have no idea what you’re talking about, but let’s go figure it out together.’ And there’s been a lot of the typical, middle-aged men in particular. It’s like, when I’m just like, you know, it’s so far over my head. The customers themselves are willing to share their knowledge with me, and that has made me learn this stuff so much faster.”

And that back-and-forth is a two-way street, according to Brant Robinson. Customer service is his favorite part of working at Allen & Palmer, where he started as a clerk as a senior in high school and is now the manager. He compares the store to the atmosphere in the bar on the old TV show “Cheers.” He said, everyone knows each other, there’s a fun atmosphere, and they’re always willing to help with any question.

“This is really more one on one, start to finish waiting on a customer, making sure he’s got what he’s got, and out the door he goes happy,” Brant Robinson said, “and you just can’t get that at Home Depot [or] Lowe’s — places like that. That’s what I would say that makes [Allen & Palmer] really stand out.”

Joe Dickenson of Mayfield works for an Edinburgh-based contractor and finds himself in Allen & Palmer maybe once a week, at least. He said, for the most part, you can find what you need to get your job done at the North Main Street store, just ask and they probably have it and know exactly where it is. He said it’s very important that the store continues on in the community.

“It has to be here. It’s a staple…without the store you’re going to Home Depot,” he said, pointing out that it can be a drive of 30 minutes or more.

Klueg also noted what it means to have the hardware store right in the village. He called it one of a community’s “core services,” along with a pharmacy, grocery store, doctor’s office, insurance office, post office and gas station. He said Northville has all those things “within a stone’s throw of” Allen & Palmer.

The presence of those businesses, he said, “is a critical part of a thriving community. So, obviously, we want to be a part of that continued fabric of the community.”

The love for Northville and its people is exactly why, Lee Robinson said, selling to Cox and Klueg was the “next best thing” to passing the business on to his children. He still remembers Klueg as their “best customer” when he was a teenager.

Cox has been working in the store just this month, but the younger man sees a formula that has worked for over a century. While he thinks there are changes to be made to meet evolving times, he also thinks it would be a mistake to change the equation.

He said, “There’s magic in the history.”